You are here: Home > Why Coaches Should Stop Yelling at Their Gymnasts 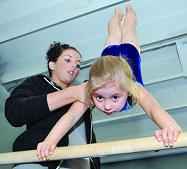 Coach spotting a handstand on bars

When a gymnast’s immediate safety is at risk, it may be useful and acceptable for a coach to yell at them in order to warn them of imminent danger. Protecting a gymnast from accident and injury and ensuring a gymnast’s immediate safety is an acceptable reason to yell, if it is possible to stop an accident from happening. I find that using a negative consequence, like yelling, in a danger situation may help gymnasts avoid such a danger in the future. But other than a safety situation, there is little good reason to think that yelling at gymnasts is useful.

Yelling at a gymnast makes the whole conversation completely one sided. Yelling also creates a negative emotion in the gymnast. That negative emotion may be related to whatever you were yelling about, or it may psychologically affect the gymnast in some completely other negative way, which coaches cannot anticipate. Either way, real rational and useful communication, with the gymnast, is halted when the yelling starts.

Gymnasts learn by example and are greatly affected by coaches, with whom they spend a considerable amount of time. If they hear coaches constantly yelling, in an attempt to get what they want, the gymnasts will do it too. The negative emotions generated by being yelled at, especially being yelled at intensely over time, create an anger in gymnasts, which often comes back out with them yelling at other or eventually, even yelling back at the coach. Their time in the sport, at that point, is almost always very limited.

Constant yelling by coaches ruins the effectiveness of the technique. If coaches are always yelling at gymnasts, there will be no shock value left when coaches really need and want it.

Coaches Who Yell Will Have to Yell More and More

Gymnasts and the subconscious mind react to emotional intensity. Eventually, a coach, who yells, will have to yell more and more just to get the attention of gymnasts and get them to react. So, sooner or later, gymnasts wonâ€™t take their coach seriously unless they raise their voice, louder and louder, and yell more and more often. At that point, gymnast will just simply tune out any communications, unless they are repeated a thousand times and at a high volume level.

Yelling May Work with Some, But Won’t Work for Many

There are some gymnasts who can deal with yelling (at least over some period of time). There are even a few gymnasts, who seem to be motivated by being yelled at. But those gymnasts are a very small minority. The vast majority of gymnasts (and humans) do not react well to being yelled at and most will eventually quit gymnastics, in response to the constant yelling and other negative psychological techniques.

2 Responses to “Why Coaches Should Stop Yelling at Their Gymnasts”