You are here: Home > Viktoria Komova 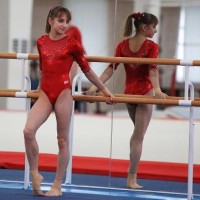 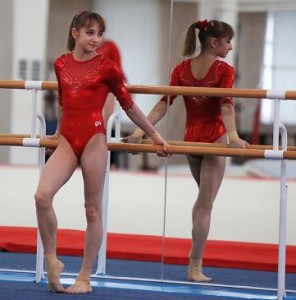 Score 15.566
Komova’s signature skill is right at the beginning of the routine.

Viktoria Komova is fully back and ready on two events, balance beam and uneven bars, in her injury recovery process and in preparing for the London 2012 Olympics in gymnastics. She is a virtual lock to make the Russian 2012 Olympic gymnastics team and extremely likely to be a multiple medalist at the 2012 Olympics.

Viktoria Komova is currently best known for her 2011 Tokyo World Championship duel with America’s Jordyn Wieber. Komova led in the AA prelims, earning the highest all-around total and qualifying first into the all-around final. But in a controversial AA final, she lost to Wieber by just .033 of a point after evidently making some lead-losing mistakes, at least according to the judging. The AA finals competition started on vault, where Komova performed a clean double twisting Yurchenko and Wieber did an Amanar putting her in the lead with the significant advantage in her vault start score. On the uneven bars, Komova performed her signature skill and routine with a double tuck 1/1 turn dismount and was the only gymnast that day to score over a 15 on bars. Wieber made a major break on bars, and lost the lead by a significant margin. On beam, Komova struggled with several connections, balance checks, wobbles and a downgraded double turn. Her tucked double back dismount had a sizeable step. Komova also had trouble on floor exercise, falling out of her double Memmel turn and a noticeably low landing at the end of her routine on a piked double back. Thus, she came in second place All-around, losing to Jordyn Wieber by a margin of just 0.033 of a point. Komova looked visibly upset and disappointed at the result and Wieber looked surprised by her win. On the next day, Komova won the gold medal on bars in event finals and so in her first World Championships, having already led her team to a silver medal in the team competition Komova won one gold and two silver medals. Due to a minor injury, Komova withdrew from floor finals allowing the 9th place qualifier and her teammate Ksenia Afanasyeva the chance to compete. Afanasyeva took full advantage of her opportunity and won her very first individual World Championship gold medal.

After the extremely close scores and lead-changing finish at the 2011 World Championships, many gymnastics experts and fans are excited to see who will win the next time the two go up against each other at the 2012 Olympics in London. It may well be Komova (or Mustafina) vs. Wieber for the Olympic All-Around gold medal. If Komova is healthy, she will likely have the edge in overall difficulty: She didn’t compete her maximum difficulty Amanar vault in Tokyo, but will try to add it back in time for the Olympics. That should put Komova ahead of Wieber in total difficulty for the Olympics. Wieber is planning some more minor upgrades but likely can’t match Komova adding an Amanar vault. Wieber, on the other hand, has been a more consistent competitor and has the mental toughness to come from behind.

May 2011 – Komova went to the ATOS Private Clinic in Munich to have her ankle injury evaluated since she was not recovering as quickly as expected. The clinic determined that Komova’s ankle required surgery (due to interior damage to the joint) and she had arthroscopic surgery on May 18, 2011.
June 2011 – Began light training.
July 2011 – Komova returns to full training after 2 separate surgeries on her ankle, one requiring a 6 week layoff and requiring a 2 month layoff. Komova got the first injury jumping off bars and the second one on floor exercise taking a step back, twisted her leg and knocked her ankle out of place.
Komova grew 4.5 inches over the previous 18 months but reported no adverse impact on her training.
February 2011 – Re-injured the ankle.
August 2011 – Russian Cup in Yekaterinburg, competed watered down floor and vault routines but full uneven bars and beam routines. 1st – Team, 2nd All-Around, 1st Beam and Uneven Bars in event finals.
September 2011 – Ghent Challenger Cup in Belgium – 1st Uneven Bars October 2011, Komova competed at the September 2011 – 7th Dinamo International in Penza -1st All-Around, 1st Beam and Uneven Bars
2011 Artistic World Gymnastics Championships – 1st – Uneven Bars, 2nd – Team and All-Around

A Prosports.ru article translated on CouchGymnast
Viktoriya Komova: â€œI Badly Dislike Losing.â€
This article has at least one problem in translation that makes it impossible to really understand her reaction to American gymnasts, either “aggressive” or “rage” – big difference. Hey, I can easily believe that she is “aggressively” competitive but doubt that “rage” is a useful emotion for her in competition, so unlikely that is what she meant. The Russian article (article is in Russian, needs translating) also has pictures and articles about Aliya Mustafina, Anastasia Grishina, Ksenia Afanasyeva and Anastasia Sidorova.

21 minute TV report on Viktoria Komova (Totally in Russian with no English subtitles)
Shows lots of training in her home gym and competition video, as well