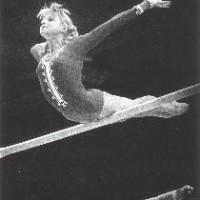 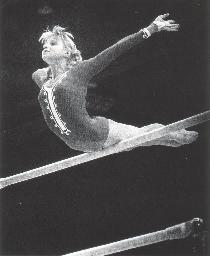 Olga Korbut on the uneven bars

The uneven bars apparatus originally were just a set of men’s parallel bars, with the bars set to different heights. Since the men’s bars were designed to be set just slightly wider than shoulder width apart, the women’s uneven bars were then very close together.

Routines in the 50s

Routines in the 1950s were kips, simple circling skill and even stationary balance elements and holds like you might see on beam. In the late 1950s, gymnasts started to do more difficult routines that included wrapping the body at the hips around the low bar while hanging from the high bar and beats (bouncing the hips on the low bar while hanging on the high bar). Release moves also began to be used – first, they were almost all transitions between the high bar and low bar.

In the late 60s and early 70s, gymnastics equipment companies began to manufacture separate women’s uneven bars apparatus. The bars became more adjustable adjustable, wider and with more sturdy equipment anchoring cables. that held the apparatus to the floor. The circumference of the bars got smaller allowing young female gymnasts to to better hold on grasp and swing more difficult skills like giants.

In the mid 80s, the bars were moved even further apart allowing for better giant wings and therefore bigger, more difficult dismounts and release moves.

Many former uneven bar elements from 50s and 60s are now obsolete or not permitted (like static holds and skills or dismounts originating from the feet, like the Korbut somersault).

It is unusual to find current young coaches and gymnasts who know much, if anything, about the history of uneven bars. The uneven bars were originally versions of parallel bars set unevenly. As women’s uneven bars evolved, women go their own bar design, but the bars were still very close together. How close? Essentially, the bars were only half a gymnasts body length apart, from fingers on the high bar to hips on the low bar. A gymnast holding onto the high bar would be able to cast and her hips would “wrap” the low bar. Not only be able to do that, but wrapping was a huge part of uneven bars at that time.

Bars had to be carefully set so that gymnasts would hit their hips exactly where they bent at the waist, but not on the hip bone (the hitting of which was extremely painful). Whole categories of wrapping skills, including wrap uprises, short kips, wrap full turn wrap release moves, wrap releases and hecht dismounts were developed. Most of those skills are no longer done at all today.

Girls Had Bar Rips on Their Hips

During the era of bar wrapping, the prevalence of â€œhip ripsâ€ was as common as hand rips is today. It was also common for gymnasts to have painful hip bone bruises from either the bars being set incorrectly or pulling in when performing a wrap skill. This was, however, as accepted a part of the sport as hand rips and wrist rips from grips are today.

Girls Doing Giants Changed their Sport and the Equipment

In spite of years of ripped and bruised hips, the width between the uneven bars was not widened until a few girls began doing giants and it became evident that girls were regularly going to be doing giants between the bars.

We know of no serious injuries (i.e. broken bones) that occurred from wrapping the bars although unusual falls could occasionally occur. One of the most unusual was Ludmilla Tourischeva who collapsed the entire set of uneven bars (snapping a cable) behind her performing a cast wrap hecht dismount. Legend has it that she stuck the landing and walked away never even looking back.

As comment below points out, it was not just a legend.

Before the advent of fiberglass bars, certain powerful gymnasts were capable of and could literally break the wooden low bar with a wrap skill on command. Legend has it that at one meet where the scores were lower than one coach wanted, he ordered his gymnast to break the bars and keep breaking them as a protest, effectively delaying the meet for hours while they had to send out to other gyms for replacement bars.

Amazingly, with the bars set so close that gymnasts could wrap, some girls still learned to do giants like the men did on the men’s high bar. Once giants were seen a the way of the future for women’s uneven bars, the rules allowed for the equipment to be redesigned to widen the settings. While the bars were widened, they were still too close for almost anyone to swing through without piking or straddling and it became necessary for girls to utilize a â€œtapâ€ swing to develop and conserve enough inertia to make it over the top in the giant swing.

After that there were a series of uneven bar apparatus changes related to widening the uneven bars, including a motorized version by Spieth-Anderson. With that invention, many coaches had visions of changing the width of the bars during the routine to allow the use of wrapping skills and giants in the routine. However, the bars didnâ€™t move apart quickly enough and that Spieth-Anderson set of bars never became universally used enough for that to ever happen.

The bar width settings have been continually widened a number of times. Interestingly, USA Gymnastics allowed the uneven bars in J.O. (Junior Olympic) competitions to be set wider than is allowed in international competitions like the Olympics and World Championships. That meant gymnast who compete in international rules meets must either practice with the bars narrower than the widest settings allowed in the U.S. or relearn certain skills, like giants, on narrower bars.

This bar routine earned Nadia the first perfect 10 in Olympic Gymnastics history. If you look close at the scoreboard, it wasn’t prepared to show a perfect 10.0 score and they displayed a 1.0 score. It was by the way the first of seven perfect 10.0 scores she would win at this Olympics. Â This routineÂ showsÂ the evolution of wrapping bar skills from Olga Korbut’s winningÂ routineÂ four years earlier and shown above. Â It also shows Russian gymnast, Nelli Kim, the expected winner on bars and in the all-around, watching as her old style of bars is surpassed by Nadia’s new level of bar excellence.