You are here: Home > The Unethical Practice of Competitive Sandbagging 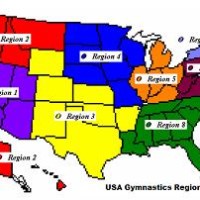 I noticed gymnasts that place 1st in at least 2 events and place 1st or 2nd AA repeat a level with an AA of about 36. My question:
How is this fair? Is there any rules regarding moving on or not being able to repeat an age and level you have already championed the previous year? It is supposed to be competative gymnastics but this isn’t competition when this is allowed. Is it a state by state thing or USAG standard that allows it?

While the USA Gymnastics minimum for moving up is a 31.0 All-Around, USAG will never mandate moving up gymnasts with any score for liability reasons. If they forced a gymnast to move to a higher level with more difficulty requirements, they could be held liable, in the case of an accident. There are a few legitimate reasons why a gymnast might not move up, like an injury during the off-season which kept them from getting the necessary difficulty for the next level, but this is rare and not the situation about which you are talking.

To their credit (Note that I am giving USAG credit for something for a change), they did put out a communication recently, specifically condemning this practice of holding gymnasts back and recommended moving gymnasts to a “competitive” level to promote fairness to all gymnasts.

It is Not the Fault of the States

Individual states do not have the power to overrule USAG and institute a mandatory move-up rule.

The Gyms and Coaches, Actually Doing This, are the Culprits

The responsibility for this is squarely on the shoulders of the gym(s) and coaches that are engaging in this practice. I have never heard any justification for sandbagging that rings true. It is obvious that they are simply trying to stack the deck, so their gymnasts can win, by holding them back to a level of gymnastics where they are virtually guaranteed to win.

Gyms and coaches do this for one reason and one reason only – to try to build their reputation as a gym and/or as a coach. They are not doing it for the gymnasts or for the sport and certainly not for good sportsmanship. But everyone knows, or should know, that they are winning only because of this tactic, not because of good coaching or a good team program.

Usually a Compulsory Practice, But Judges’s Cup Bringing Out the Worst In Coaches

The situation usually exists primarily in the compulsory levels, but the National Judge’s Cup meet qualifying system has brought out its own brand of the same problem. The judges use the meets for fundraising, run local state meets and qualify “Level 7” gymnasts to a so-called National Meet. The meets are held very early in the season and are often the first meet of the year for many gyms.

The situation, in every state I have seen participate, is that most gyms take gymnasts, who they know are going to compete Level 8 that same year, and hold them back as Level 7 gymnasts just for that meet, so they have the best chance of qualifying and winning. The winners at the State level, and certainly the winners at the National level, are almost 100% really Level 8 gymnasts.

Gymnasts Know What is Truly The Right Thing To Do

I was in a gym, where a coach called over a gymnast, who had been a Level 7 the year before and was definitely moving up to Level 8, and told the girl that she was going to hold her back for one meet, so she could qualify for the National Judges Cup meet. The girl looked at her, and said, “I’m not going to do that. I competed at it last year and it’s someone else’s turn.” and she turned and walked away (Brittni – you are my hero. You always CTR).

Sandbagging is Really Hurting the Gymnasts, Not Helping Improve Their Confidence

Apart from the lack of fairness of “sandbagging” gymnasts, there is always also a negative effect on the gymnast’s career. Especially at the compulsory levels, spending more than one year at any level, much less a compulsory level, wastes valuable training time on skills that are not moving a gymnast forward toward high level optional gymnastics. And in spite of the proclamations by many parents and coaches, “winning” like this does not give a gymnast any real confidence or sense of accomplishment.

Sandbagged Gymnasts are Falling Behind Every Year

Gymnasts know they are being held back, because the girls, they competed against the previous year from other teams, are now a level above them in competition. Gyms, who do this regularly at the compulsory level (Level 4 – 6) end up with their gymnasts 3 levels behind the gymnasts the girls they originally competed against their first year and an average 3 years older than the average Level 7 gymnast. The true message that gets through to gymnasts, being held back, whether they win or not, is that their coaches don’t trust their talent and ability to continue to successfully compete against their peers.

Getting all or most of your gymnasts to high level optional gymnastics (Level 10 and Elite) requires a training program designed to do that and the coaching ability to do so. Gyms, that consistently hold gymnasts back, are advertising the fact that they are not capable of coaching well enough to move gymnasts up every year or coaching all their gymnasts to a high level.

Sandbagged Gymnasts are Losing and Wasting Years of Their Career

Gyms, that also primarily train only the skills for each level (instead of training gymnasts from the beginning to be high level optional gymnasts), waste time doing only the 31 major compulsory element skills, over and over again all those years, while gymnasts in other gyms are learning that many new skills in a month, or a week or even in one day (personal coaching record = 37 new skills for a gymnast in one day on the 4 events plus tramp and tumble trac). Holding gymnasts back, and especially training only the skills for that year, instead of training for the future, means that, in the long run, that gymnast has no real good shot at a successful high level gymnastics career.

Frustrating/Unfair, But Those Sandbagging Gymnasts Will Likely Never Catch Up

So, as frustrating and unfair as it is, when you see “sandbagging” going on, remember that this gym and that gymnast are not really winning in the real competition and in real gymnastics, which is defined by success in reaching Level 10 and Elite, and in being successful at those levels. Your gymnast may not have won that particular medal, at that lower level, but they are now ahead in their gymnastics career, of that gymnast and most every gymnast, at any gym that “sandbags.”

And you should take comfort that your gymnast knows that the medals they do win, they have earned against their peers, and they can take true pride in that. And that is something that “sandbagged” gymnasts will never again be able to do in their career.

Have Your Own Questions?
Ask The Coach
If you have questions relating to gymnastics, we will do our best to provide you with answers to the best of our ability.

5 Responses to “The Unethical Practice of Competitive Sandbagging”