You are here: Home > Floor Skill 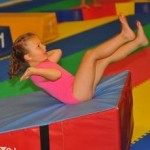 There are some backward roll safety concerns regarding neck injuries, especially when young beginner gymnasts are first learning them.

A photo animation of Kristina Baskett doing a 1-arm handstand.

An interesting question about whether Level 9 gymnasts are allowed to do double fronts on floor, but more interesting if they actually do it.

Limber: A frontward or backward gymnastics flexibility skill that is similar to a walkover except the legs remain together at all times. The skill begins on the feet, passes through a handstand and finishes on the feet again in a stand. A front limber requires more shoulder and lower back flexibility than a walkover.

Johnson: A gymnastics floor skill named after U.S. gymnast Brandy Johnson. It consists of a switch-split leap forward with leg change and Â¼ turn to side split leap or straddle pike position. The skill has been rated by the FIG as an A level skill and the FIG number is 1.205. This is a good […]