You are here: Home > Beam Skill

The tumbling series requirement on beam is often problematic for gymnasts, and the most common, therefore, most problematic is the back handspring series. 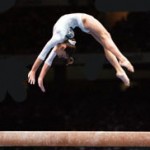 GymnasticsZone gives 8 tips to help a gymnast who is having trouble with bent and split legs in her back handspring on beam.

Learn this straightforward beam training technique that will have gymnasts begging to do skills on high beam and reduce the time coaches spend spotting.

The main requirement for success on beam is to have a beam training system that includes, both beam skill mastery and proper beam equipment progressions. A systematic approach to training is important on all events but is even more critical to success on beam, because of the very small margin for error. Beam Equipment Progressions […]