You are here: Home > Steve Legendre 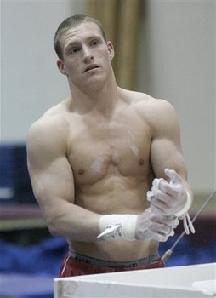 During his University of Oklahoma collegiate career, Steve Legendre won 12 All-America honors and 6 NCAA titles (2009 – All-Around, 2008-10 – FX, 2008-09 – Vault) and a team title in 2008. In 2008, as a freshman, he also became the first Sooner men’s gymnast to win 2 NCAA event titles (floor and vault). In 2009, he won the All-Around, FX and vault titles â€” the highest number of titles by a gymnast that year, He won 5 All-America honors passing Bart Conner’s record for the number of All-America honors in one year. In 2010, he claimed his 3rd consecutive FX title tying with Jonathan Horton’s Oklahoma University record. He was the sixth Oklahoma Sooner to win the Nissen Emery Award award, joining gymnastics legends Bart Connor who won in 1981 and Jonathan Horton who won in 2008.