You are here: Home > How to Spot (or Not Spot) Tzukahara Vaults 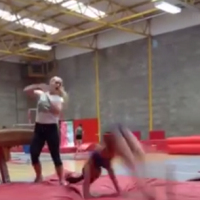 This article refers to a discussion and video on a Coaches’ FaceBook group. The coach was asking for advice an all of the comments from other coaches talked advice regarding the height and positioning of the vault table and mini-tramp.

As often happens in this seminar, there are many opinions and pieces of advice, which unfortunately, even when correct, often miss the most critical and important factors. As many of the coaches commented, the vault table in this case needs to be up so the gymnast can approximate the correct blocking angle and stretch.

But every comment so far missed the real problem, which is incorrect (and therefore potentially unsafe) spotting technique. The spotter is incorrectly positioned to either ensure the gymnast rotates sufficiently or to be able to help safely control the gymnast’s landing.

I have an intractable philosophy about spotting. “Never tell a gymnast (or stand there to spot) unless you are certain that you can spot them through the skill safely no matter how much or how little they do, or whatever they might do incorrectly, like kick out at the worst possible moment.”

There is no negative judgment here. I totally understand the situation of coaches who must figure out on their own how to spot and I initially used a “second somie double back-like” spot, when I first started spotting Tzuks, since I already had a lot of experience spotting double backs. This was a time before pits and when girls in the US were just starting to learn and compete Tzuks.

But I learned that not all gymnasts, especially gymnasts new to doing Tzuk vaults, always rotate enough (for example because of a poor block or hand that slips) to get to the right position where the “second somie double back-like” making that spot difficult to impossible.

There are essentially two ways to safely spot (control the COG – center of gravity – of a gymnast to allow them to finish the skill safely) Tzukahara vaults. Each requires the correct positioning of the spotter in a particular place. Unfortunately, you have placed yourself in a spotting position where you cannot do either spot well or safely.

The first is to spot “up” on a spotting block close to the vaulting table and to control both the height of the “block” and the rotation of the gymnast ensuring that when they leave your control they are past their head and headed toward their feet.

The second is to spot and assist the rotation of second somersault, keep the gymnast high enough in the air to finish their rotation and to support the gymnast’s landing on their feet. Essentially you are controlling the last quarter of the skill’s double rotation just like you would spotting the “landing only” of a double back. This would qualify more as a competition and competition warm-up spot.

Both Spots at Once

An advanced version of these spots, that requires very solid spotting blocks and a high level of speed, agility, experience and practice on the part of the coach, is doing a combination of both spots. This spot starts up on the spotting block where the coach helps with the block and rotation and then jumps down off the spotting black following the flight of the gymnast to spot the landing of the second somersault.

This coach is not positioned correctly for either type of spot. Further, they are using the second type of spot, when the first type of spot is safer and more appropriate for first time Tzuk vaulters early in their learning of the vault. 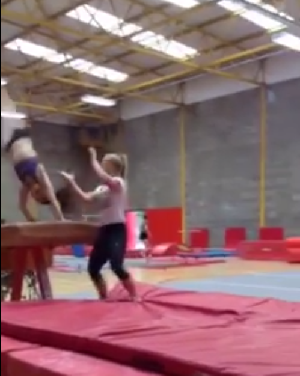 In order for the coach to to provide sufficient block, height and rotation, they should already be in contact with the gymnast at this point in the vault and helping control their movement. Because the coach is down on the landing mat, they are not positioned to get into the spot early enough.

The coach is on the correct side for this half-on. But should already have a grip on the gymnasts right upper arm with their right hand (to help with the block and height) and have their left hand on the COG/stomach/hip of the gymnast to help hold them up high enough to rotate sufficiently.

As often happens with skills involving twisting, coaches will need to decide whether they want to learn to spot the skill on either side or (as I chose) to always spot more difficult skills on the coach’s “strong” side. Coaches will need to either learn to spot the Tzuk vault from both sides (depending on which way the gymnast does their half-on) or modify and spot the vault from a single side using a hand(s) on the chest/back block and rotation spot.

This is the correct spotting block set-up and positioning for the first method of spotting gymnasts early in the Tzuk learning process:
This spotter positioning allows the coach to get in early and be able to reach the gymnast’s center of gravity and assist the gymnast at the peak of their height and assist with block and rotation. 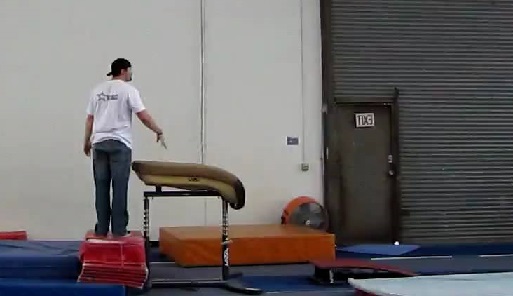 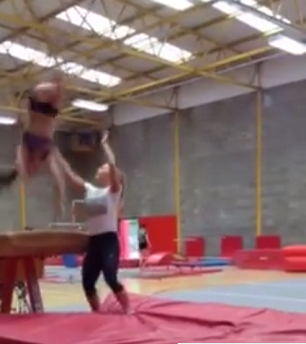 As you can see in the above picture, the coach still has no control of the gymnast and is able to have no effect on the height or rotations of the vault. This is again because the coach is down on the mat instead of up on a spotting block. 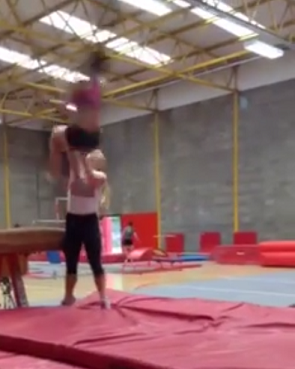 Does This Really Look Safe to You? 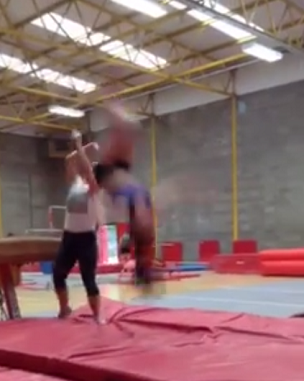 This picture shows the real problems and safety issues with the coach’s positioning and spotting choice type. The gymnast still has more than half of a somersault rotation to complete, but their head is only two feet off of the mat. The coach has no contact with the gymnast and has zero ability to help increase or control rotation or to help on the landing.

The Gymnast Survives to Vault Another Day – Fortunately 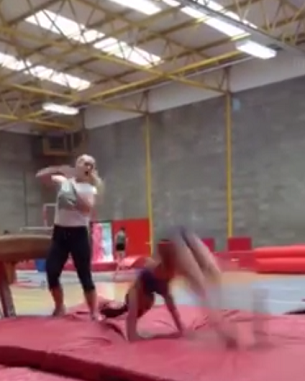 Wisely, the gymnast has put their hands down to protect their head and face and had enough preliminary Tzuk training and soft enough mats to avoid injury, while primarily doing the majority of the Tzuk vault themselves.

Just because this “worked” this time does not mean this gymnast or other gymnasts learning the vault will be as luck in the future. The coach needs enough “spotting timers” in the up on blocks (using either the upper arm/COG spotting technique which requires switching side depending on the half on or with the stomach/chest and back COG spotting technique, which allows coaches to always spot on their strong side.

Note that the upper arm spotting technique also allows the coach to more easily completely stop the rotation of the vault, if things have gone really badly. The coach will actually be practicing this when doing “spotting timers” since they will not be having the gymnasts turn the vault over in the timers.

A coach should feel confident with this spot when they know and have habituated the spot so they can control the block, height, rotation and landing for any Tzukahara vault. And they need to have done enough spotting timers with each individual gymnast that they know they can safely deal with anything that gymnast may or may not do.

So my advice for this coach is to:

#1: Get a pit! There really is no safe substitute for having a pit. Do whatever is necessary to get one.

#2: Raise the height of the horse when using a mini-tramp and get the correct setting of the mini-tramp, springboard and vault table for each gymnast so they are able to hit the correct blocking angles and extension.

#3: Spot up on blocks with all gymnasts just learning and turning over Tzukahara vaults for the first time.

#4: Go back and learn and habituate “spotting timers” with all gymnasts using both the mini-tramp and a regular vaulting springboard.

#6: Don’t let gymnasts turn over any Tzuk vaults until both the gymnast and the coach are well-prepared and completely ready.