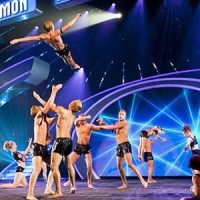 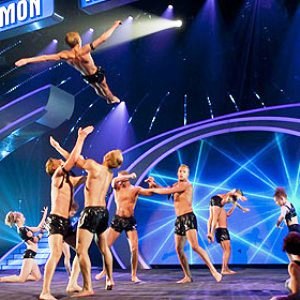 Spelbound Performing at the 2012 London Olympics

Spelbound originally consisted of 13 acrobatic gymnasts, seven boys and six girls, who were all members of the Great Britain Acrobatic Gymnastics Team ranging in age from 12 to 24. They were:

The group is coached and the choreography is done by Neil Griffiths, who is a Senior Coach with the Great Britain National Team and Head of Acrobatics at Heathrow Gymnastics Club.

Spelbound auditioned for Britain’s Got Talent, went on to the semi-finals and finals and won the competition, receiving £100,000 (almost $170,000) to split among the 13 members and coach, Neil Griffiths.

While there have been a number of changes to the member lineup, Spelbound still performs. You can book Spelbound through their management team, MIG Management Ltd, at:
http://www.migmanagement.com/
Email: dan at@  migmanagement .com
Phone: l +44(0)7584 393 483