You are here: Home > Simone Biles Best Beam Routine Ever 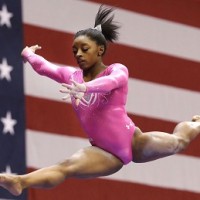 Nastia Liukin was quoted as saying this Simone Biles beam routine at the 2016 Pacific Rim Championships in Everett, Washington was the “best routine ever.”

Aly Raisman won the silver medal with a 59.9 and Laurie Hernandez and scored the third highest score at 59.8.