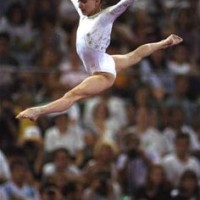 It’s Not About Perfect: Competing for My Country and Fighting for My Life

This book will really appeal to gymnasts because most most of this book (240+ pages) is about her gymnastics training and competitions. It also covers how the lessons she learned in gymnastics carried her through her battle with ovarian cancer.

Shannon Miller is the most decorated gymnast in American history and winner of 7 Olympic medals. In the 1992 Barcelona Summer Olympics, she won 5 Olympic medals in spite of breaking her elbow a few months before the Games. In the 1996 Atlanta Summer Olympics, she was a part of the “Magnificent Seven,” which won the first US Olympic team gold medal in gymnastics and defeating the Russians. She also won the first ever Olympic gold medal on the balance beam won by an American.