You are here: Home > Sandy Woolsey 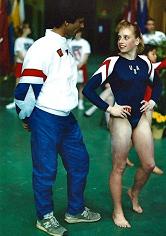 Born: August 15, 1972
Birthplace: Denver, Colorado
Began Gymnastics: At age 6 at Mile-Hi in Denver, Colorado
Gymnastics Club: At age 14, in 1984, Sandy moved to Desert Devils in Arizona on her own. Her family joined her a year later. On the Desert Devil’s Elite training squad, Sandy jumped from 23rd in 1988 to 3rd in 1989 in the US National team rankings.
Coach(s): Desert Devils coaches Stormy Eaton and Jon Aitken
High School: Marcos de Niza High School
College: University of Utah – Class of 1996
College Gymnastics Team: University of Utah Sandy was a four time Collegiate All American (1993, 1993, 1995 and 1996). She twice scored perfect tens in her college career twice (once each on balance beam and uneven bars).
Husband: Brett Holcomb
Current City: Highlands Ranch, Colorado

Sandy Woolsey had a reputation as an All-American girl. She always seemed to smile and look happy and in the positive attitude gym of Stormy Eaton had a lot success in national and international competition. That may have been one of the last positive-attitude coached, internationally successful gyms in the U.S.

Sandy retired from Elite gymnastics right after the 1991 World Championships where, even though she placed second at the 1991 Nationals, she was voted off the Worlds team by a system, in which the USGF allowed the coaches to determine the team, giving each coach one vote for each girl that he/she had in the running. Bela Karolyi had four girls (Kim Zmeskal, Betty Okino, Hilary Grivich and Kerri Strug), so he got 50% of the vote, in essence, letting him to choose all the girls from his team to compete.

Replaced By Gymnasts She Had Beaten in the National Competition

The remaining two Worlds spaces went to Shannon Miller (coached by Steve Nunno) and Michelle Campi (coached by Rick Newman), both with Karolyi gymnast or coaching connections. So in a stunning reversal of the traditional methods of choosing World Championship teams, Desert Devil’s gymnasts Sandy Woolsey and Elizabeth Crandall were voted off the team, in favor of gymnasts they had beaten at Nationals. This was one of the first of many such unfortunate situations as the Karolyis consolidated influence, power and control over the U.S. World Championship and Olympic team selection processes.

Sandy Woolsey posted a link toÂ this video on her FaceBook page on the anniversary of the passing of her coach, Stormy Eaton, with this comment:
“Here it is, the infamouse video! Today is a significant day with the Anniversary of Storm’s passing so I thought I’d post. What makes this precious is how on a high profile meet Desert Devils were the runners. After my routine everyone hugs me like an invitational, this would be unheard of now. Oh ya, and I got to moon the Nation, ha, not embarassing at all! Seeing everyone, coaches and girls in this video, is even more valuable now than I thought possible. I love all my gymnastic sisters and brothers and all who were touched by Desert Devils and especially Stormy! Thank you to all, my cup runneth over!!! â™¥ Beth Higginbotham, this is for you ;)”