You are here: Home > McKayla Maroney 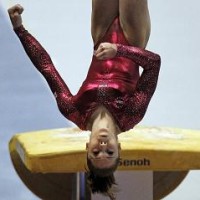 Some people recover from mild concussions within a few hours. Other people take a few weeks to recover. While McKayla may be back in time for the Olympic Trials, her current training may be limited. Seems like a very negative scenario for the US if as close to a virtually guaranteed Olympic Gold Medal vault winner as could be imagined, misses her chance in London. All her fans and US supporters are praying for a quick recovery.

McKayla Maroney – “The Vault” – The Amanar

Another Stuck Amanar by McKayla Maroney

McKayla Maroney’s Three and a Half Twisting Layout!

This is a syndicated image, which originally appeared at Gymnastics Gifs.

McKayla Maroney – BORN TO BE A STAR

2012 Training Camps – Maroney has upgraded her second vault to a a new vault (a round-off, half-on, full-twisting layout front somersault), which she has verified at two national team training camps 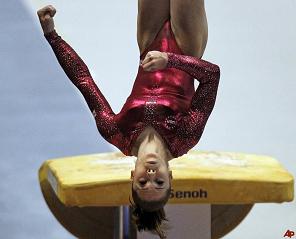 This article and video give a brief glimpse into the daily life of 2011 World vault champion, McKayla talks about how she got started in gymnastics, about her coaches, her goal-setting process and how it to be World vault champion.
McKayla Maroney Vaults onto World Gymnastics Scene