You are here: Home > Learning Cartwheels 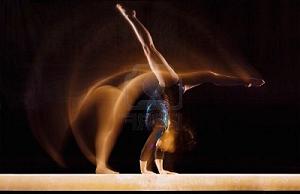 Well, basically my question was in regards to my daughter’s strength. She’s a Level 2 – 7 year old training 9 hours, doing Great in what she trains, but has recently voiced her concern (this after many years of my noticing that her upper body strength is lacking). She stuck her cartwheel on the Gymnova and was encouraged by her coach to attempt an unspotted Cartwheel on a lowered beam with mats. She started getting fidgety (my view from the outside) and the jumped right off. Speaking with her later, she voiced her concern of collapsing because her “arms are not strong enough”. She’s quite intuitive and she knows what she strives for on her own…

Well and update to this question above, we do have an extremely approachable coach, but she’s not in charge of training management. Back to the “Approachable Coach” I did speak with her and she voiced the very thing I knew “Adriana is not ready for heavy strength training, and requires a lot of repetitions in handstands, wheel-barrels and push-ups, if I want to do some at home on the side!”

My question has essentially changed to: “Do you feel this is right? & is there any other advice. you could give me in order to help her gain that confidence to try the cartwheel unspotted on that beam?

Thanks so much for your time!

About her beam training. I am not convinced that strength is her real problem. If she can hold a handstand against a wall for 20 â€“ 30 seconds, she likely has more than enough strength to do a cartwheel. If she does cartwheels on floor without problem, that also would be an indication that strength is not the problem with her cartwheel on beam. The fact that she already does cartwheels on the â€œGymnovaâ€ (It is a well-known gymnastics equipment company, but I am not familiar with this being used to indicate a piece of beam equipment, but I assume that it is some kind of wide, padded low beam) already would also seem to indicate that strength is not the problem.

She Likely Has a Legitimate Reason She Feels Unready

The fact that she â€œShe started getting fidgety and the jumped right offâ€ would more likely indicate to me that she is nervous or scared to do the skill. (Donâ€™t tell her she is scared â€“ That alone could make her scared or more fearful â€“ bad programming). In this case, her intuition may be right (she is not ready), but her reason (rationalization) that her arms are too weak may not be the real reason (which she may or may not be consciously aware of). My guess is that she is not ready or does not feel ready to do the skill at that next higher beam equipment progression level (and likely her intuition about that is likely correct.

Spotting Gymnasts on Beam Does Not Necessarily Engender Confidence

Another problem may be if she â€œlearnedâ€ her cartwheel by being spotted on the â€œGymnova.â€ Learning skills while being spotted on a beam instead of mastering them completely on a line on the floor and/or a foam floor beam alone often is a poor method of teaching. Spotting of any gymnastics skill on beam is not ever necessary, if it has been mastered on a floor line and foam floor beam. Coaches may still want to safety spot.

Because they are uncomfortable doing the skill on a piece of equipment, where they cannot do the skill themselves, they alter the skill â€œto try to make it seem saferâ€ to them. They can also become dependent on a spotter and have to be â€œweanedâ€ from a spot, which, in the long run can actually take longer than learning and mastering it without any spot at all.

Back Up in the Progression

My solution for that problem has to do with backing up in her beam cartwheel equipment progression and mastering the skill so she is confident enough to move not only to the next level, but to the high beam.

Gymnasts Need to Prove to Themselves They are Safe

The first danger point in a cartwheel is missing their first or second hand. When they are looking at the beam, this is a quick and easy step (not so quick when they will be learning a back walkover or back handspring on beam, however). But the process of learning still must not only have them always placing their hands on the beam, but with their hands in the right position and shoulder width apart.

Know What the Biggest Danger Point Is

The real danger point in a cartwheel on beam (at least on a high beam) is missing the first foot, which will result, either in straddling the beam or sliding down the beam on the outside of their leg â€“ both painful on a high beam. On a low beam, gymnasts are often concerned with partially missing their foot and twisting their ankle or falling awkwardly and/or embarrassingly.

Know All the Potential Pitfalls (and Falls)

A less common and usually less dangerous error is missing the second foot, if the gymnast is not paying attention, which can change the results of that error from just stepping off the beam to an awkward fall backwards, on or off the beam.

So my method of training gymnasts for beam involves teaching them to master and be confident that they will never miss their hands or either foot. The training starts with them doing a cartwheel on a line and/or then on a foam floor beam (piece of 1.25 inch thick, 4â€ wide and 16 feet long foam).

Master Each Phase in Order

First they only focus on correct hand placement, which they do by watching their hands going on the beam. They do not focus or worry about foot placement at all, just get the hands right and convince themselves by repetition that they can do this every time.

Watch What is Going On

The next step is to concentrate on making sure the first foot goes on the beam. They must already have learned to do their cartwheel on floor, while watching their hands and first foot land (looking under their arms while upside down). They literally watch their foot going onto the beam. If it is going to be off, they adjust it to make sure it goes on. This is also the stage where they experiment with the speed at which they do the cartwheel â€“ fast enough for momentum, but slow enough to be able to control their foot placement.

Again, they have already mastered the hand placement and are doing it by habit now, and they only need to concentrate on the landing of their first foot. No thought or effort is put into landing the second foot at this stage. By repetition practice and testing themselves, they do enough of these, and enough perfectly in a row, to prove to themselves that they will never miss their first foot. When they reach that point, they are ready to switch concentration to consistently landing the second foot. They still watch their hand and first foot placement, but focus on staying square and standing up smoothly so their second foot comes down on the beam.

Allow Whatever Time is Necessary for Mastery

This whole process is designed to let them prove to themselves they will always do the skill safely, no matter what. When they are confident and consistent, moving up to the next beam level and even to the high beam is a quick process. I allow gymnasts to take whatever time they need to prove each skill and progression to themselves. They, after all, are the ones doing the skill and the only one whose confidence level really matters.

This System Works for All Beam Skill

There are certainly many more coaching tips about doing cartwheels gymnasts need to learn. Doing cartwheels with a straight body line, in and out, stretching out the hand reach, placing the first foot down just two to three inches from where their second hand is, staying square, etc. These all need to be taught as well, but this is the process for getting gymnasts to be safe, comfortable and confident when moving up in the next equipment progression. This is the system I use for every beam skill â€“ identify the danger points and master them in order.

Sorry! I am sure this is way more than you wanted to learn, but it is difficult for me to answer with less than a comprehensive explanation.

Good luck and let me know if you have any other questions.