You are here: Home > Larisa Iordache

How Larisa Iordache (Almost Not) Got Into Gymnastics

When she was little Laris also wanted to take up ballet. Mariana Silisteanu, a gymnastics coach, saw her rollerblading, poised and fearless, in a local park. The gymnastics coach asked her mother if she wanted to send Larisa to gymnastics, but her mother answered, “No.” Her mother later did allow Larisaâ€™s grandmother to take her and check out the gym, but it was still not love at first sight. But like with many gymnasts, she overcame her shyness, “played” gymnastics and after her first hour in gymnastics, she did not want to leave the gym. Her coaches started training her on harder skills and eventually started training her to be a future Elite gymnast. At age 11, she became a member of the Romanian Jr. Elite National team and moved to Onesti. At age 8 years old, she won her first gold medals at the Romanian â€œLittle Gymnastâ€ National competition.

Larisa has been competing primarily Yurchenko vaults: Full-twisting Yurchenko, Yurchenko 1 1/2 and a Double-twisting Yurchenko. In 2009, she also competed a round-off half-on, front tuck vault at Nationals.
Larisa is training and potentially could compete an Amanar.

With Stuck Tumbling & Turns This Routine Could Win 2012 Olympics 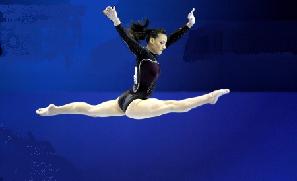 One Response to “Larisa Iordache”