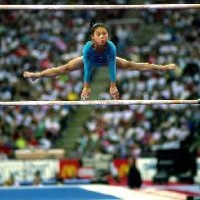 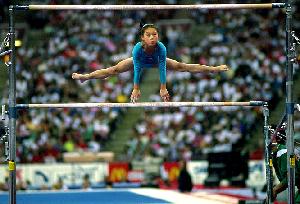 Kim Gwang-Suk is primarily known for her original uneven bar release move, named after her and for a North Korean age falsification scandal. Her highest gymnastics achievement was at the 1991 World Championships, where she won the gold medal on uneven bars with a perfect 10.0 score. That led to expectations for her to win the gold medal on bars at the 1992 Barcelona Summer Olympics, but one step on her dismount left her tied in fourth place, out of medal contention.

Born: February 15, 1976, 1977 or 1978
The North Korean Gymnastics Federation listed Kim Gwang-Suk’s age as 15 for three consecutive years and the Federation submitted inconsistent birth year information, at least three times for separate major international competitions. Her real age was never determined. Kim Gwang Suk was at the center of one of the earliest age falsification scandals. She was tiny (4’4″) even for a gymnast and at the 1992 Olympics was missing front teeth, but was supposedly 17 years old. Her coaches and the North Korean Federation claimed she lost her teeth in a training accident several years before the Olympics. The North Korean women’s gymnastics team was banned from the 1993 World Championships, because of her age-falsification scandal.

Kim Gwang Suk was the 1991 World Champion on the uneven bars, winning the event with a perfect 10.0 score and a routine that included an original release move, the Counter-Kim. That 10.0 score on bars was the last perfect score ever awarded in a Gymnastics World Championships.

Original Skill:
Kim Gwang Suk – aTkatchev-front flip toward the high bar, known in the FIG Code of Points as the Counter-Kim and classified as a ‘F’ difficulty element (as of the 2008 Code of Points).

We currently know nothing about Kim Gwang Suk and her current location and occupation are unknown. She did serve as as a torchbearer during the North Korean portion of the 2008 Olympic torch relay in Pyongyang.