You are here: Home > Kieran Behan qualifies for London 2012 Olympics 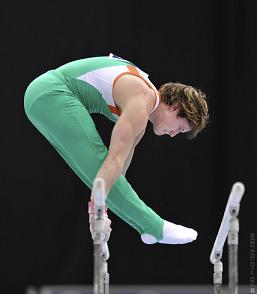 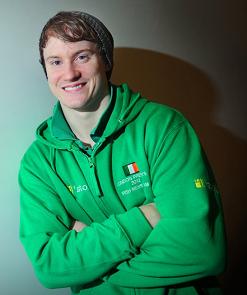 Nine years ago as he sat in a wheelchair, doctors told Kieran Behan it was likely he might never walk again, let alone perform gymnastics â€“ today he qualified for the Olympics, the first Irish man to do so in almost 16 years. Today Behan made history, becoming the first Irish man to qualify straight through to the Olympics. Barry McDonald was previously the first and only Irish gymnast to do so in 1996 at the Atlanta Olympics by means of a wildcard.

Behan competed at the All Around Menâ€™s Qualification last night in the O2 Arena, the same venue which will host the gymnasts this summer. It was a shaky start with a small scupper on the Parallel Bars, meaning he lost approximately 1.5 marks, just for one single move. He looked clearly disappointed with the score and performance but put it behind him to score a 13.233 on High Bar. He then moved to floor, his specialty piece which he is well known for since being crowned the Category B World Series Floor Champion back in December. Last night Kieran proved himself worthy of that accolade. He took the the floor scoring a fantastic 14.800, the joint highest execution score of the day (with Dan Purvis from GB who qualified in 1st). The scores are made up of a difficulty value and an execution value. He looked every bit the professional and shone in front of a crowd who cheered him on from the stands, shouting his name and waving Irish flags. To the untrained eye, a simple Pommel routine at an event like this must seem an odd choice, almost crazy but Coach Simon Gale and Behan are a fantastic pair and know what theyâ€™re doing. Do as little as possible, but do it well to avoid a lot of deductions. He did just so picking up an 11.758, by far not the lowest Pommel score of the day. Behan does lack some strength on Rings however he pulled off a great routine scoring 13.566, again not as low as other competitors who might be considered as stronger than him on this apparatus. The final rotation saw him take to vault, another strength of his, where he performed a clean tight Yurchenko 1.5 twisting vault, securing a score of 14.933.

Subdivision three concluded at 10:30pm last night with Kieran lying in 59th place in the All Around competition and 6th place on floor, guaranteeing him a spot in the floor final which will take place tomorrow evening. The top eight on each apparatus advance to the finals, normally this crowns new champions but however these event finals are more for show and for the LOGOC to Test everything out. Had he done enough in the All Around qualification to secure one of 24 spots in the London 2012 Summer Olympic Games?

14 hours on and Kieran Behan was still awaiting the announcement of the final scores. Coach Simon Gale, gymnast and Head of Delegation Sally Filmer left the arena last night wondering if their back-of-the-napkin calculations were correct. Each nation is permitted a maximum of two gymnasts to qualify as individuals for the games. Calculations and guesses were made last night that by a process of elimination, Great Britain had taken the top 3 slots in the All Around last night with Purvis,Thomas and Keatings so one would be knocked out of the list. Likewise, other nations who had more than one gymnast qualified, but if your nation has already qualified you are not included in this list â€“ confusing? Yes! All three were kept awake last night until the early hours of the morning wondering if the most improbable of dreams would come true. The hours went by but the FIG had still not released the official list of individual competitors. Kieran had an agonizing wait until Full Twist delivered the news at 5pm this afternoon:

â€œIâ€™m speechless, itâ€™s surreal, I donâ€™t know where to start. We were in Simonâ€™s room in the hotel when Sally called us. She had been speaking to you on the phone and you broke the good news, she was ecstatic. We were in the room jumping about in tears! You think, donâ€™t get your hopes up, in case, well, you know – but we did it. I mean this is what dreams are made of, this is what Iâ€™ve worked for and itâ€™s paid off. Itâ€™s been a long road with injuries but no matter what happens, you believe in yourself and youâ€™ve got like minded people around you, you can achieve.â€

Kieran thanks his sponsors Stoi Athletic Wear, his friends, family, club mates in Tolworth Gymnastics Club and coaches for all the support he has received over the last year especially.

Simon, Kieranâ€™s coach, discussed how he felt upon hearing the news and the build up to the Test Event:

â€œI was stunned, I am stunned. We spent the night thinking weâ€™d done it, one of the foreign judges said last night â€œyouâ€™ve done enoughâ€ but until you see it in black and white on paper thatâ€™s just it. We had no idea and didnâ€™t know until we heard it from you (Full Twist), itâ€™s amazing, weâ€™re amazed. It was a long nights wait.â€

â€œWe found out literally just before Christmas, so we had no immediate plans in place in preparation for the Test Event. We had just over three weeks to prepare and he hasnâ€™t competed AA in a while. Itâ€™s been tough on him, we had Christmas Day and New Years Day off, while his team mates were with family he was in the gym on Boxing Day.Just you and your coach in the gym can be tough on a gymnast but at this stage that all seems like forever ago. Our game plan has worked. â€œ

So what does the next couple of months hold for Behan? Kieran hopes to upgrade his routines:

â€œI hope to maximize my floor as itâ€™s my strongest piece, upgrade as much as I can and maintain my fitness and execution. A good celebration will be had after the floor final tomorrow night! I just really canâ€™t wait!â€

Simon however just puts it simply as Kieran has been so unlucky with injuries to date:

â€œWe got some good fortune but now we should just wrap him in cotton wool!â€

Behan has a busy few month ahead of him, he will prepare for the Category A World Cup circuit which will take him as far as China, so hopefully todayâ€™s news will help him with both confidence and funding. In May he will compete in the Menâ€™s European Championships in Montpellier with a full Irish menâ€™s team with Luke Carson, Anthony Oâ€™Donnell and Chris Oâ€™Connor likely to help form the team. Of course, with a full Irish team, itâ€™s never too early to start thinking about Rio 2016.

Kieran will compete at the Floor finals tomorrow evening here in the O2 at 6.30pm. His coach says:

This is a syndicated post, which originally appeared at Full Twist.

Kieran Behan of Ireland qualified with this FX Floor Final Routine at the London 2012 Test Event
He ranked 4th in the final with the second highest execution score of the competition.

FIRST EVER Qualification for a World Cup Final for Ireland