You are here: Home > In Memoriam: Kim Bird 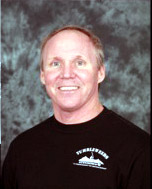 Gymnastics coach and choreographer, Kim Bird passed away Monday evening, November 19, 2007, after battling complications from Valley fever. Kim was the founder of Tumbleweeds Gymnastics and well known, well-loved and well-respected throughout the gymnastics community. Tumbleweeds Gymnastics was founded by Kim in November 1990. The gym and team program grew steadily under his leadership. His girls’ team program was very successful with State, Regional and National Champions and girls earning college scholarships.

Kim Bird was perhaps best known for his ability to establish and maintain a high level competitive program while still providing a positive and healthy environment for everyone. He believed in attempting to fulfill the individual needs and goals of his gymnasts and their families regardless of their level of ability and involvement in the sport. he was particularly successful in transferring his own passionate love of the sport of gymnastics to his gymnasts and others around him.

He had the attitude that every gymnast that walked through the doors of his gym was a star at least in his eyes and he treated them as such. He was well known for his sense of humor, energy and charismatic personality. Kim was an incredible coach who saw great potential in every single girl in his gym. He had an infectious love of gymnastics which inspired each girl to want to be the best gymnast they could be. He was an amazing, generous man with a huge heart who forever touched the lives of all his gymnasts and those he came in contact with in the gymnastics community. He raised a generation of bright, ambitious and confident young women and inspired many of his gymnasts to follow him in a career of coaching gymnastics.

A native Tucson Arizonian, Kim Bird graduated from CDO High School and attended the University of Arizona where he majored in Exercise Sport Sciences. Kim earned a Bachelor of Science degree in Education and was a former NCAA All American in both Gymnastics and Cheer.

Kim Bird coached gymnastics for more than 25 years. He was an accomplished Beam and Floor Choreographer, an Arizona and regional/national clinician and a National Elite rated Judge. He also judged NCAA gymnastics events including University of Arizona and Arizona State University meets and the Pac-10 Gymnastics Championships.

One Response to “In Memoriam: Kim Bird”