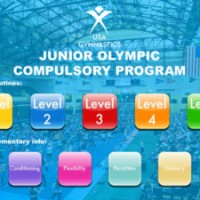 Compulsory gymnastics competition, sometimes called outside of the United States – mandatory competition, is a set of defined event routines that all gymnasts at that particular level are required to perform. The routines are the same for everyone at that level on every event. Worse, the music for the floor routine is also the same.

Theoretically, the purpose of the compulsory routines is to develop common necessary skills for all gymnasts at that level. It also makes it somewhat simpler for the less experienced compulsory judges to evaluate routine performances.

It’s Important to Have Large Numbers

In practice, it is very difficult to design compulsory routines which are both developmental and easy enough to enable large numbers of potential competitors to be able to perform them.

In the most recent round of USA Gymnastics 2013 – 2021 compulsory routines the bottom level of competition, Level 3, has been made easier to allow more athletes to participate by dropping the kip option from the bar routine.

Start at Either Level 3 or Level 4

Gymnasts are allowed to enter the USA Gymnastics competition system at either Level 3 or Level 4. The primary decision as to which level to enter at are most likely to be whether a gymnasts can perform a kip and make it over the vault table. If they can, they could probably start at Level 4 and not Level 3.

How Long to Reach Your Goals?

Gymnasts, coaches and parents should have an overall perspective (view) of how compulsory competition fits into their overall gymnastics goals and career. First of all, assuming a gymnast wishes to reach the Elite level (from which Olympic gymnasts are chosen), a coaches, parents and gymnasts should have a good idea of how long it is going to take to reach that level.

No More Than One Year Per Level

If it is taking more than one year to move up from one compulsory level to another, this is of concern for making the Elite level in a timely manner, if at all.

In fact, gymnasts, coaches and parents should and need to be working on and learning optional skills from the beginning of their gymnastics career, if they are to be able to move up from optional level to optional level. If they do not, they may have difficulty moving through optional levels in a timely manner.

Compulsories Do NOT Prepare You for the Olympics

In truth, compulsory routines are not effective at all as Olympic or Elite gymnastics training systems. Gymnasts and programs that wish to reach these levels, use other training programs to prepare either in conjunction with or as a substitute for compulsory training.

There are some gymnastics teams and programs in the country, which specialize in compulsory competition. This is not necessarily a bad thing. Not all coaches and programs are capable of producing Olympic athletes and gymnastics is a good sport and good for gymnasts of all levels. It is, however, something gymnasts should be aware of.

In these programs, gymnasts typically remain at one level until they win and sometimes even stay at that level after they have been winning for a number of years. Optional coaches often call these “professional” compulsory programs.

Other Countries Also Have Compulsories

Many other countries also have their own unique compulsory training and competition systems, which are different than in the United States. There is as much difference in compulsory programs in the world as there are cultural differences between the different countries.

There are Still Elite Compulsories 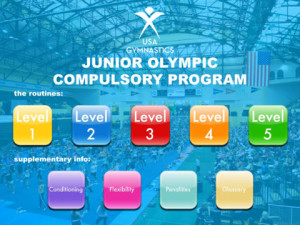 One Response to “Compulsory Gymnastics Training”