You are here: Home > A Gymnastics Champion Who Happens to be Deaf and Blind in One Eye 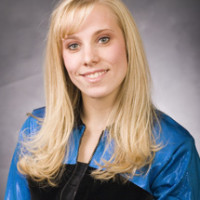 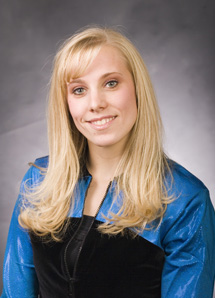 Aimee Walker Pond has done it all – competed and won medals as an International Elite gymnast, a National Level 10 gymnast and as a collegiate competitor, appeared on TV and in a movie, all while being totally deaf and blind in one eye. Her story is compelling and inspirational and we should all be saying to ourselves, “What am I complaining about?”

Started Gymnastics: Age eight
When Aimee was seven years old, she watched her cousins practicing at a gymnastics center, and asked her mother if she could take classes with them. The coach would not allow Aimee to participate because of her deafness, saying that she would not know how to communicate with and coach a deaf gymnast. At age eight, her mother enrolled her in classes, telling her not to use sign language in front of anyone. Even after the coach noticed Aimee did not respond when spoken to, she talked to Aimee’s mother and wanted her to be on the team.

Aimee Tells Her Own Story

This videos was produced using remote videophone technology. Aimee appeared in Utah and the host appeared in Washington, DC.

High School: Graduated from Mountain View High School in Orem, Utah. Aimee transferred there from California to be near her coach, Mary Walker, while her parents still lived in Valley Village, California.

Distinctions: One of only a very few disabled gymnasts to have competed at the National, Elite International and college gymnastics levels. Aimee is completely deaf and is blind in her right eye.

Quotes: When compared to Helen Keller: “She’s so wonderful, but I am glad I’m not Helen Keller, I’m so lucky- I have my one eye.”

1998: Represented the USA in Russia at the 1998 Nelli Kim Cup in Kazakstan and placed fifth on floor, sixth on beam and 16th All-Around.

2004 | Freshman Year
Aimee competed her freshman year for UCLA in 2004 before transferring to BYU.

2006 | Sophomore Year
Aimee competed in four meets on vault and bars before an ankle injury put her out for the rest of the season. She had the highest team bar score in the first two meets of the 2006 season.

2007 | Junior Year
Aimee scored a career-high 9.825 on bars in a tri-meet against Oregon State and USU. She scored higher than 9.700 six times during the season and won bars in two meets.

2007 | Junior Year
Aimee did not compete due to a shoulder injury.

Movies and TV Shows: At age 14, Aimee made a cameo appearance in the movie ““Little Girls in Pretty Boxes”“.
Aimeee acted on “Baywatch” and was “saved by David Hasselhoff.”
1992 Baywatch (TV series) Lili Seger â€“ “Big Monday” (1992)
Plot: Kaye becomes intrigued with a young deaf girl, named Lili, and her overprotective mother, Sharon, whom Kaye tries to introduce them to sign language.
1998 Baywatch (TV series) as Herself â€“ “Friends Forever” (1998)
Plot: One of the Special Olympics participators, a hearing-impaired girl named Kara, takes a liking to Morton, an orangutan, and when she tries to hide Morton, they end up trapped in a cave in a rising tide that threatens to drown her and the orangutan.

Future Plans: She hopes to coach gymnastics and especially wishes to inspire other deaf gymnasts to succeed at advanced levels.

2000 US Classic – US Gymnasts Battle for Gold
Aimee Walker segment starts at 3:40